Energy has transformed our material life and brought magic to our lives through its different forms—light, sound, heat and electricity. But we consume it in large amounts and often waste it.

Electric bulbs, cars, fans, air conditioners, televisions, cooking ovens, chullahs, machines—the word ‘energy’ conjures up images of almost everything that makes up our everyday lives. Some forms of energy are renewable, including energy harnessed from the sun, wind and water. Energy produced from stuff we usually discard as garbage, such as dead trees, branches, leftover crops and gobar or dung, along with other forms of livestock manure—resources collectively called ‘biomass’—can also be used and then replenished.

There is also a second category—non-renewables. All forms of fossil fuels—oil, coal and natural gas—are examples. We are using fuels that were made more than 300 million years ago, before the time of dinosaurs. These fuels are being depleted slowly but steadily due to constant use. India, for instance, has oil reserves at present production levels only for 19 years, gas for 28 years, and coal for about 230 years. Then once they are gone, they are gone.Scorching Point

The impact of ‘global warming’ has already reached scorching levels, and is rising rapidly. Here is a sample of what the future holds:

There are two key issues that loom when we explore this wonder resource called energy. First, there are finite or limited amounts of non-renewable energy sources. Unfortunately, the human race has become addicted to these and has already used up far more than it can afford. So Planet Earth is heading for a major energy crisis.

Second, overuse of these forms of energy has completely tilted the atmospheric balance that nature had created to make this a habitable planet. Emissions from vehicles fuelled by gasoline and factories that burn oil are now turning it into a boiling pot.

We consume less and conserve: Saving energy is the first step to energy conservation. Switching off electrical gadgets when they are not in use and turning off the car engine while waiting at a traffic signal point are great ways to start. This, however, is not enough. Investing in products, appliances and services that use energy more efficiently is a second step, e.g. using compact fluorescent lamps that consume 40 per cent less electricity than ordinary bulbs and driving fuel-efficient vehicles. New and innovative technology is the buzz word here. But again, this is not enough!

We find alternatives: Technology has to be used to find more long-term and sustainable solutions, such as ways to harness energy from renewable sources more efficiently, cost effectively and on a larger scale. The sun, wind, and biomass can be used to produce energy that can be spent and then created again—without threatening the precarious climatic balance—as these sources are far less polluting than fossil fuels. Interestingly, in India, this switchover will mainly affect those who live in cities and towns because they are the prime consumers of fossil fuels or commercial energy.

India is energy-scarce and has a price-sensitive market. But it is also blessed with abundant solar irradiation that can be harnessed effectively to mitigate energy scarcity to a large extent. Wind power in India has grown at a cumulative annual growth rate of 26 per cent from 2002–03 to 2012–13. The Ministry of New and Renewable Energy has proposed a Wind Mission to achieve an ambitious target of 1,00,000 MW installation by 2022. 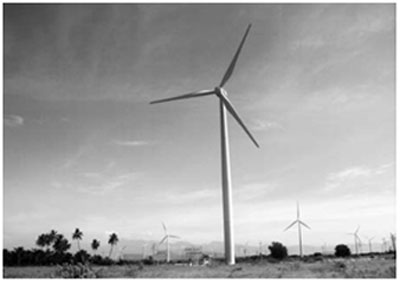 India is the main story. It continues to be the second largest wind market in Asia, and in 2015 surpassed Spain to attain the fourth place in terms of cumulative installations. The Indian wind sector has struggled over the years to repeat the strong market performance of 2011 when over 3 GW was installed. 2015 seems to signal the onset of a recovery phase given the government’s desire to address some of the structural bottlenecks in the market.
—Global Wind 2015 Report

In the Global Wind Energy Council (GWEC) annual Market Statistics 2016 report, Steve Sawyer, GWEC Secretary general, said, ‘India set a new national record with 3,612 MW of new installations, 2016’s fourth largest market; this brings the country’s total to 28,700 MW, consolidating its fourth position in total cumulative installations as well. We have great expectations for the Indian market and we look forward to seeing offshore making a contribution in India in the next few years.’